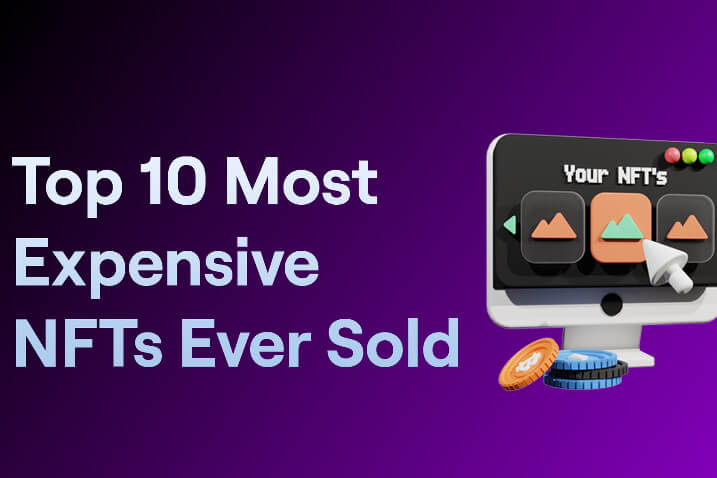 Emerging onto the market in 2015, NFTs stunned the world in 2021. Collections like CryptoPunks and The Bored Ape Yacht Club have made their name in the list of the most expensive pieces of art one could buy.

Considering the exponential growth in NFT sales, which NFT will perform brilliantly and which NFT will steal the limelight can’t be estimated; however, keeping a record of the most expensive and best NFTs is definitely possible. If this sounds exciting, continue reading ahead, as we will raise the curtain from the 10 best NFTS that were sold at unbelievable price in the previous year.

*Warning- The prices may shock you! Just kidding, but of course, selling amount of these non-fungible tokens will blow your mind for sure.

The #1 spot goes to the anonymous NFT artist, Pak. For a whopping amount of $91.8 million, 250,000 NFTs of the piece were sold on Nifty Gateway. This NFT is basically an open project that offered multiple masses or small, singular tokens to the buyers. Buyers who gathered more mass received a large final mass and their possibility of getting bonus mass increased. 26,000 collectors bought the project and the biggest holder got Alpha Mass. One of the best NFTs, it garnered the highest sales value by a living artist.

If there’s one NFT piece that attracted both interest as well as controversy, it is- Everydays- The First 5000 Days by Mike Winkelmann, professionally known as Beeple. Its price value was the third highest at an auction. Inspired by the Philadelphia-based artist, Tom Judd, this piece is the result of a daily 5000-day project by Beeple and comprises of various vector images and gifs, including the images of big names like Jeff Bezos and Donald Trump.

Known as the first NFTs based on Ethereum, CryptoPunks are one of the best NFTs. With no two characters alike, 10,000 unique characters were generated, initially. In the year 2021, four CryptoPunks took the marketplace by storm and were sold for more than $30 million. These were

HUMAN ONE can undeniably be termed one of the best NFTs, as it consists of both physical as well as digital aspects. Not an ordinary NFT, this hybrid piece shows a kinetic video sculpture with a corresponding dynamic NFT. The piece is designed to showcase art that evolves as time progresses. The masterpiece will evolve further, as Beeple has its remote access and creative authority. Head of digital sales at Christie’s, Noah Davis, called HUMAN ONE a triumphant follow-up to EVERYDAYS- The First 5000 Days.

5. XCOPY, Right-Click, and Save As Guy

Cozomo de’ Medici aka Snoop Dogg bought this spectacular art and proved his dominance in the NFT marketplace. The non-fungible token is created as a meme and aims at individuals who do not see digital art from practicality point of view and doesn’t value it. In simple words, the art mocks those who do not value crypto art or believe that NFTs are useless. XCOPY’s artwork is a popular asset as an NFT artwork.

Two versions of this piece were created, all thanks to the presidential election held in 2020. While one version featured Donald Trump as defeated, other version featured him as the winner. To ensure the buyers that their purchase is 100% original and impossible to copy, the artwork contains an encrypted image or video file along with a digital signature that is impossible to reproduce.

Upon selling Ocean Front, Beeple established himself as one of the most successful NFT artists. A part of the Everyday series, the NFT is created to create awareness regarding climate change, which makes it one of the best NFTs. The art piece features a tree growing over garbage, trailers and shipping containers. Caption of this non-fungible token is- ‘Together we can solve this’. It got successive bids from three different bidders- and Justin Sun, the Founder and Chief Executive Officer of the Tron Foundation, and Twitter users @3fmusic, @BabyBelugaNFT, and Justin Sun. Funds generated from it were donated to The Open Earth Foundation, a non-profit organization.

8. A Coin for the Ferryman

Known as one of the first pieces by the artist, this NFT is an XCOPY-minted NFT. Recognized as an NFT pioneer, it features deformed and disturbed visual loops that discover serious issues like death, dystopia and apathy.

Launched during Art Basel Miami, Ross Ulbricht Genesis collection constitutes of writing and ten artworks (from childhood to teenage to prisoner) by Ulbricht. Its creator, Ross Ulbricht, is an ex-market operator on the darknet who was sentenced life imprisonment in 2013. The NFT also features an original animation by Levitate and voiceover by Ross, which is based on Ross’s experience in the prison.

Creator of this NFT rose to name and fame in 2013 after releasing classified NSA documents that exposed an illegal mass surveillance program. Stay Free shows an image of now-exiled whistleblower created from court decision. Funds generated from the sale of this NFT were donated to Freedom of the Press Foundation.

So, these are the 10 best NFTs sold at amazing prices in the last year. Since the NFT marketplace is quite happening and buyers are willing to spend like crazy, keeping an eye on the upcoming NFTs would be interesting, as the set record could change anytime and a new non-fungible token might create the buzz with its massive selling price.

1. What are some of the best NFTs to buy?

Among a pool of NFTs, the best ones to purchase are-
· Pudgy Penguins
· CryptoPunks
· Doodles
· Axies
· Bored Ape Yacht Club
· The Galaktic Gang Collection

2. Which NFT marketplace is the largest?

The largest NFT marketplace is OpenSea and sells NFTs based on sports, virtual reality, trading cards, etc. It has 4 million items in 200 categories.

3. Which NFTs are leading the marketplace?

4. Who has the most expensive NFT in the world?

Vignesh Sundaresan, an entrepreneur has the most expensive NFT in the world. He owns the third most expensive piece sold by a living artist, as he purchased Beeple’s historic “Everydays: The First 500 Days at a price value of $69.3 million.

5. How much are NFTs worth?